Tony Phillips is an 18 year veteran of professional baseball who while playing for the Oakland Athletics captured two American League Championships (1988 and 1989) and a World Series title in 1989. Mr. Phillips was the 10th pick by the Montreal Expos in 1978 and amassed 2023 major league hits and 160 home runs while playing for the Athletics, Detroit Tigers, California Angels, Chicago White Sox, and the New York Mets. Tony had over 9110 plate appearances, often as his team’s lead-off hitter, playing primarily 2nd and 3rd base.

Tony has dedicated his efforts in the years since retirement from Major League Baseball teaching young players the skills, the required attitude, and the work ethic to develop a “big league approach” to success. 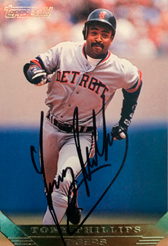